Bugger, its all gone wrong!

Yep it has...........decided to change the oil. And what happens? The thread in the crankcase bolt hole gives up the ghost and now I can't tighten the bolt, which means it will leak, shake loose, drain the oil, cause the engine to seize and I'll be over the handlebars like superwoman on a mission. So it now needs drilling and helicoiling.

Fortunately, the ever lovely Clive from Hartgate's in Mitcham  says he can sort it - but not until Friday. Better take him some big fat doughnuts for fitting me in then. But at least tomorrow will be a clean hands day. 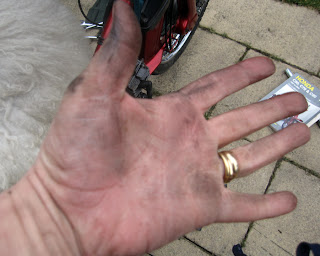 Good news is I fixed the leaking carb. Just a seal. But better these problems happen now than en route to Portsmouth on Saturday morning I suppose.......although that's not quite what I said at the time.

Gave the bike a good wash after it's dousing in Cornwall mud at the weekend. Haven't got a clean picture, so you'll have to imagine what she looks like now. 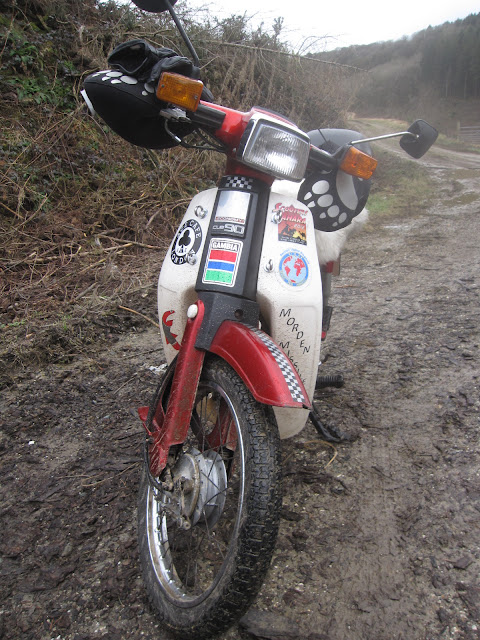 Also packed most of my gear - several times. Chucked quite a bit out so now I have just two small panniers (actually two bicycle handlebar bags lashed together under the seat) with a pair of trainers, a plate, cup, spork, a collection of football and cycling shirts, plus keyrings to give to kids on the way down through Africa. Not much in them at all - deliberate, as the plan is to give stuff away as I go, and put colder weather gear in the panniers as the weather warms up. My clothes fit in a very small dry bag in the top box. Netbook and wash kit is also in that.

And I had my last jab. Julie (below) and Jo at the Superdrug Travel Clinic in Croydon were excellent. Both went out of their way to find out about relevant disease patterns and source best prices for vaccinations - which are not cheap. But I don't want to end up needing treatment for something that I could have avoided, particularly if I'm taking it way from somebody who needs it. 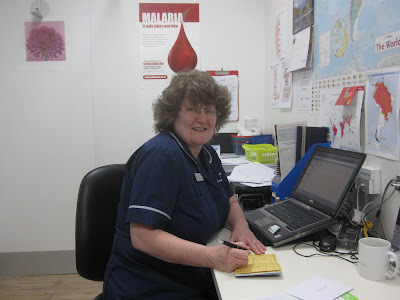 Tomorrow I've got to take the last of the spares, plus the donated knitted hats (yep, it gets cold in Africa too) and the hoodies donated by Recognition Trophies in Wallington ( thanks Clive and Sue)to Sue     ( a fellow scooterist) in Lindfield, so that it can all be taken to Portsmouth by car by her son on Saturday, and loaded on the Shogun that will follow us.

The most difficult thing today was persuading my son to load songs onto my Ipod to keep me entertained while riding.
Posted by Rhodabike at 13:40

Countdown has begun......six days and we're off. Well not  off but off. Hopefully.
Eight aged but tarted Honda C90s and four new 110 Chinese copies riding 4000miles/7000k down to The Gambia in West Africa, where they'll be donated to Bansang hosital,  200 miles inland from Banjul. They'll be used by doctors, nurses and other health workers to reach patients in outlying villages. Full tale here: www.scootersinthesahara.co.uk

Boat to Spain, ride through Spain, boat to Morocco, up and down the Atlas mountains( three times) across Western Sahara ( a war zone) and the Sahara Desert, through a minefield and into Mauritania, onto Senegal, then into The Gambia. Turn left at he Gambia River and ride 200 miles to Bansang and the hospital.
Here's a rubbish map for your delectation: 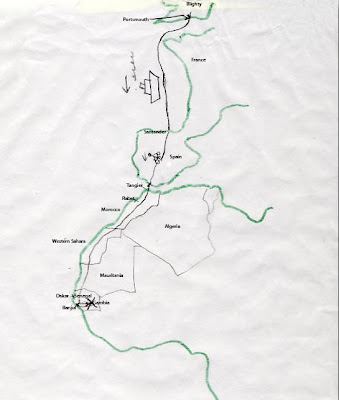 Paperwork
We only needed visas for Mauritania but that turned out to be the biggest hassle so far, involving  three rides to Brussels from London with everybody's passports to get them. Lots of  arguing, no receipts, and a thwarted attempt at pocketing money and passports, before  I finally bagged them. But that should avoid a visa battle in Rabat.
International driving licences done, UK driving licences done, medical insurance sorted although it won't be valid for Mauritania as the FO told us not to go there, V5's and UK/European insurance all done, everything copied x 4 and stashed as separate but complete sets, and each in a sealed plastic bag to stop water and sand smudging the ink.
Medical

The jab thing. Yellow Fever is mandatory and £50.00, the rest are optional. Some are free, some are not. Apparently YF certs go for big bucks in Africa as they are much sought after by locals. But we won't be parting with ours. Malaria. Got Malarone for that.

Bike
Red 1989 C90. It was in pretty good nick but very dirty when I bought her from an old bloke in Morden, South London. Only mod is 10cm lopped off the rear of the seat and a parcel shelf put in the gap. This is made from an old plastic chopping  board and allows me to fix a bag onto it instead of the seat - which makes it much easier to refuel. Did think of replacing the double seat with a single version, but that would cut the usability of the bike at the hospital as it couldn't then carry a pillion too easily.
She's called the Morden Missile, and currently confined to the back garden instead of the back room where she normally lives because she's sprung a leak in her carb and is farting petrol fumes. Her flatulence will be fixed later but thought it wise not to blow us all up when making toast this morning.
Shakedown trip to detect horrible mechanical faux pas and test other gear.
Three of us ( me on the 'Morden Missile', Gordon on 'No Name' - 'riding 'cross the desert on a bike with no name.....' and Nadine on 'Wanda the Honda') rode to Rossi's mini HUBB meet in Cornwall at the weekend. 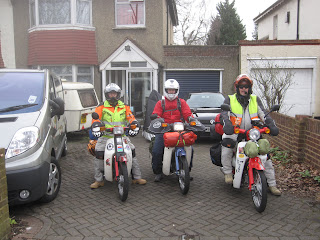 Had a great time, great weather, great company, great riding, and an excellent rescue service.  The float bowl disintegrated on Wanda 20 miles from Rossi's place on the way down but he kindly recovered the bike and fixed it the next morning, plus the rear brake which had also fallen off. But apart from that, all was well and even my 'night before with much swearing' repair to the Missile's front brake held up ok. Either that or I didn't really test it enough, but given we rode 542 miles on the little steeds, I think it's ok.
So now it's the Monday before departure and it's just packing to do. I'm taking nothing, Gordon is taking the kitchen sink. Got to get my haircut, clean the house (because the boys won't do it while we're away), organise the emergency documents  so they can find them if needed, warn the neighbours to keep an eye out for mega parties in our absence, tell the credit card people we're overseas and not to block our cards if used in weird places, and dust the cat.
Departure
Next Saturday morning 1100, bound for the Travelodge at Emsworth PO10 7RB, stay the night there, then depart for Portsmouth 0800 on Sunday morning. Yahoo.
Posted by Rhodabike at 02:52 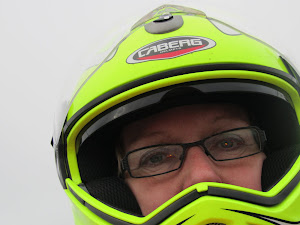 Rhodabike
London, UK, United Kingdom
I ride bikes because I love them, and travel on them whenever I can.